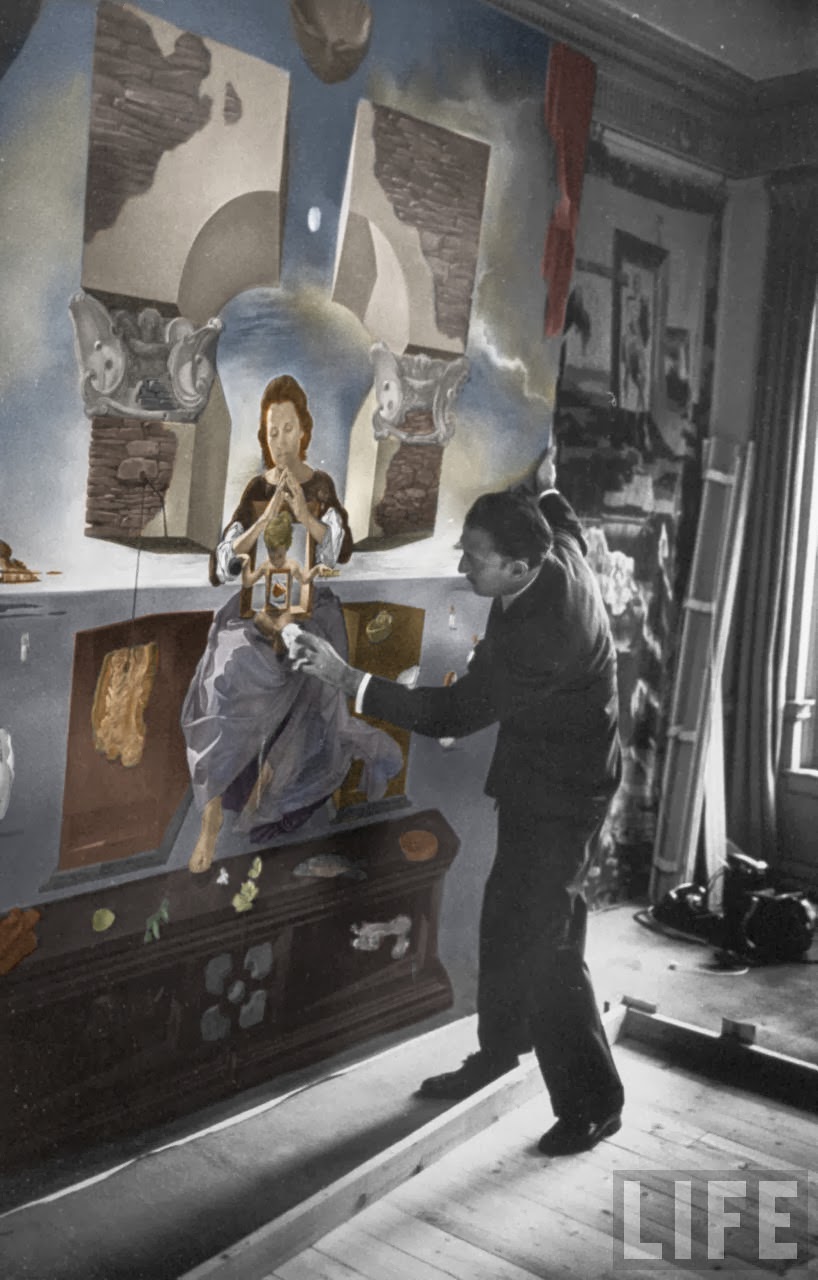 Partial colorization Salvador Dali and his painting The Madonna of Port Lligat the second version, painted in 1950﻿. 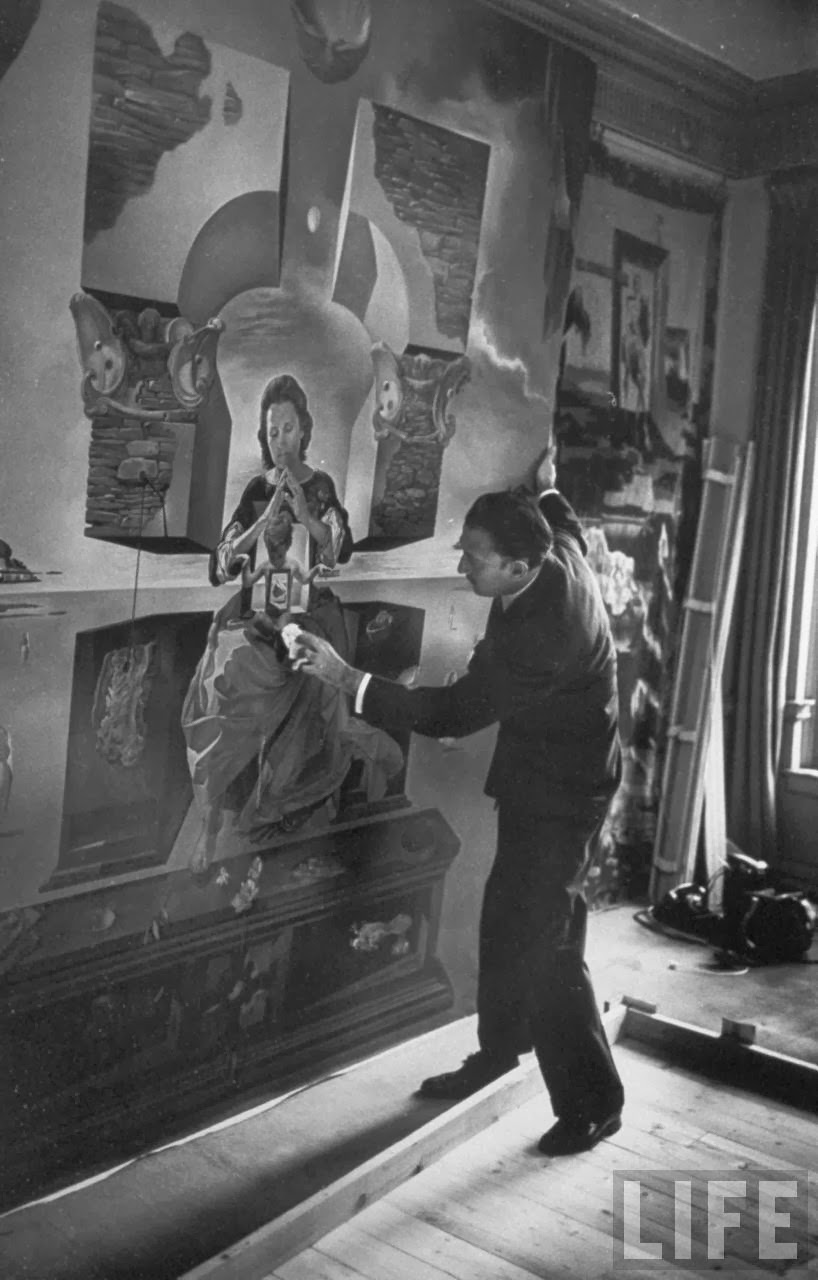 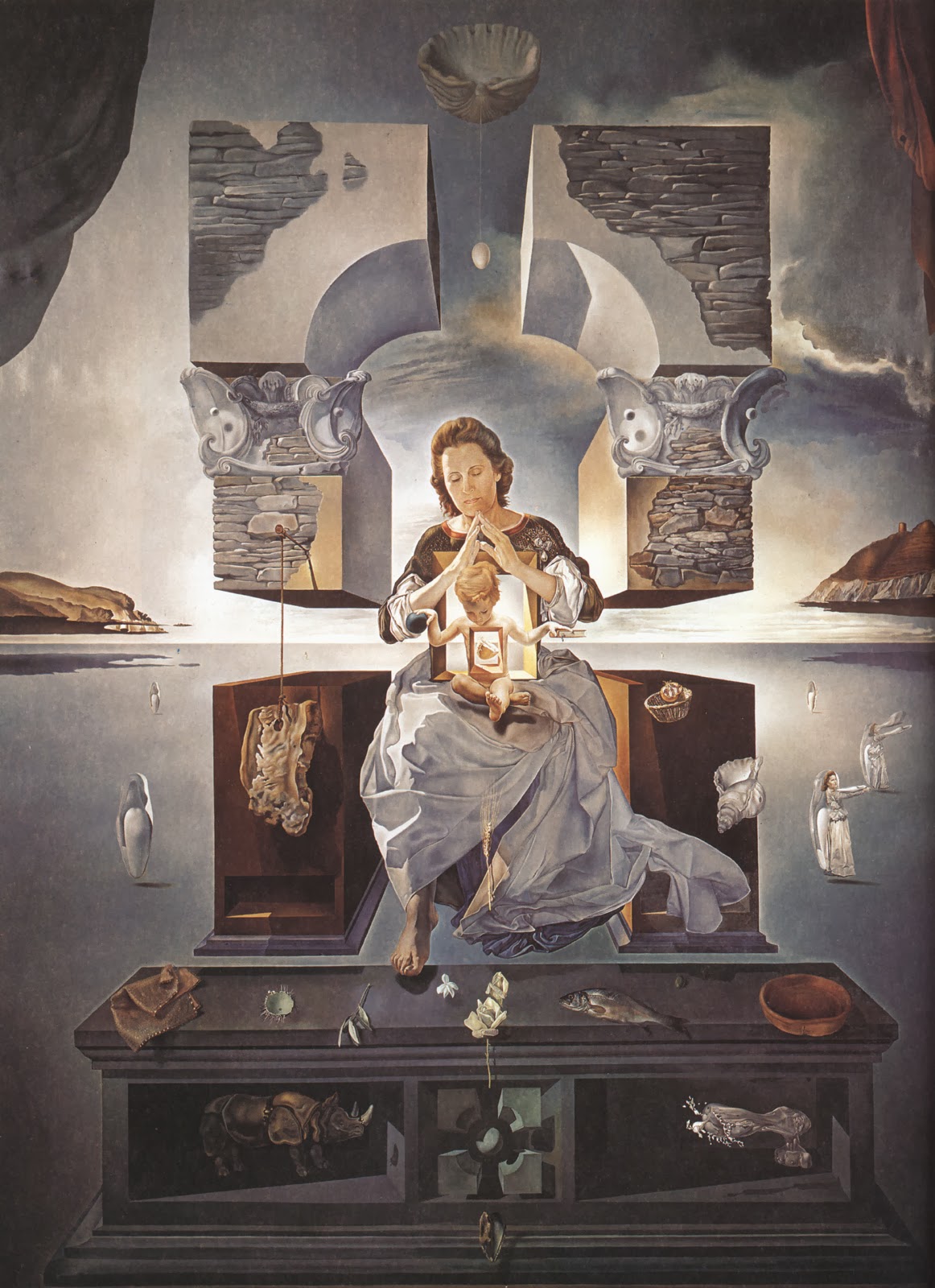 Original painting
Dali used his wife, Gala, as a model for  the Madonna in this painting and the first version from 1949. The 1950 Madonna is exhibited at the Fukuoka Art Museum in Japan 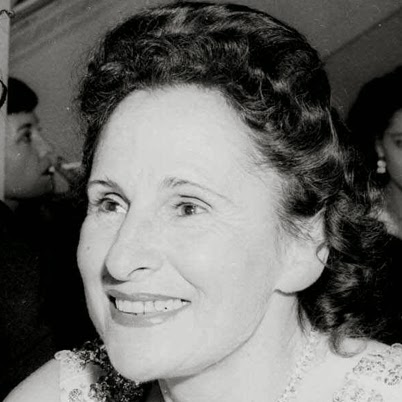 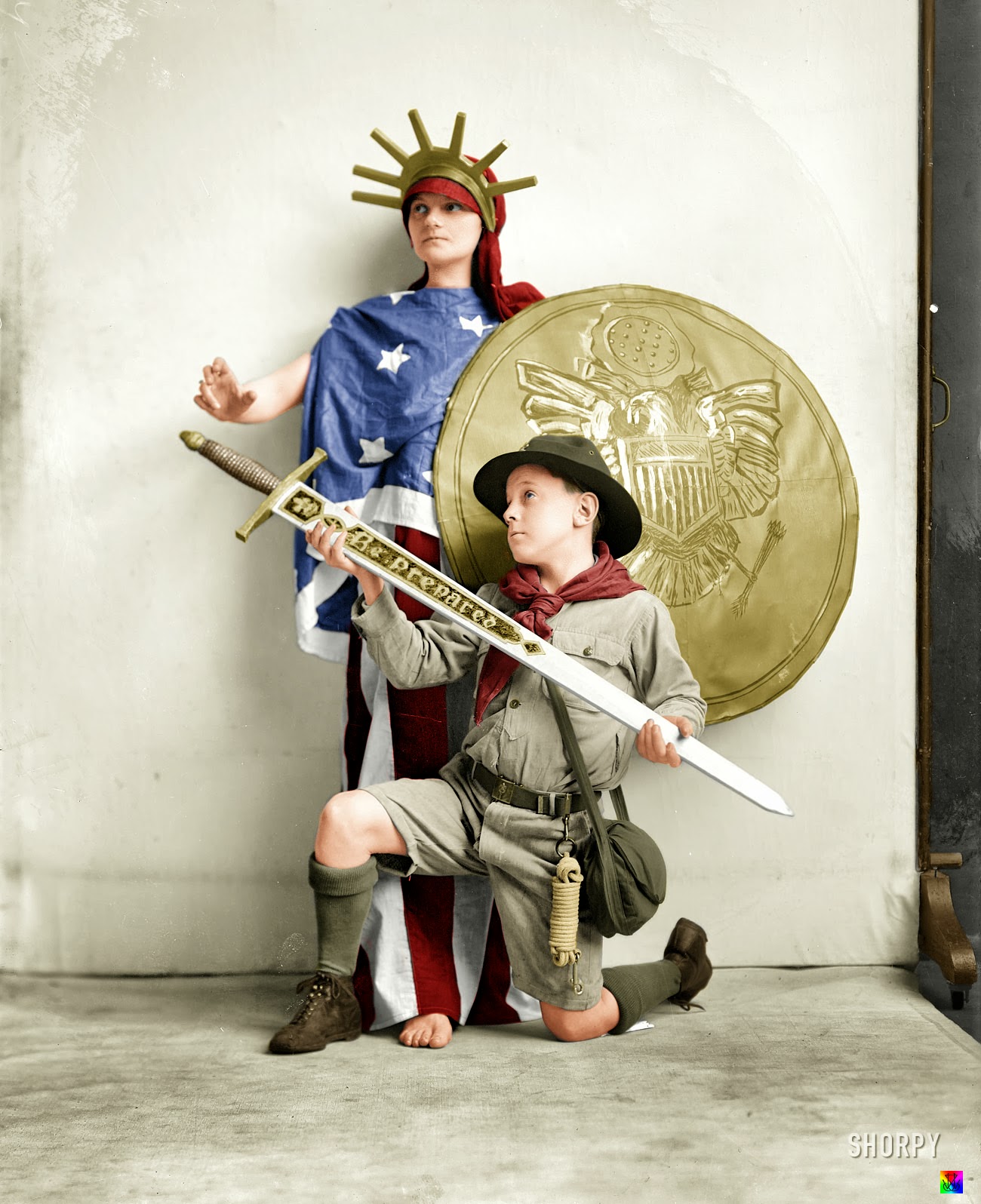 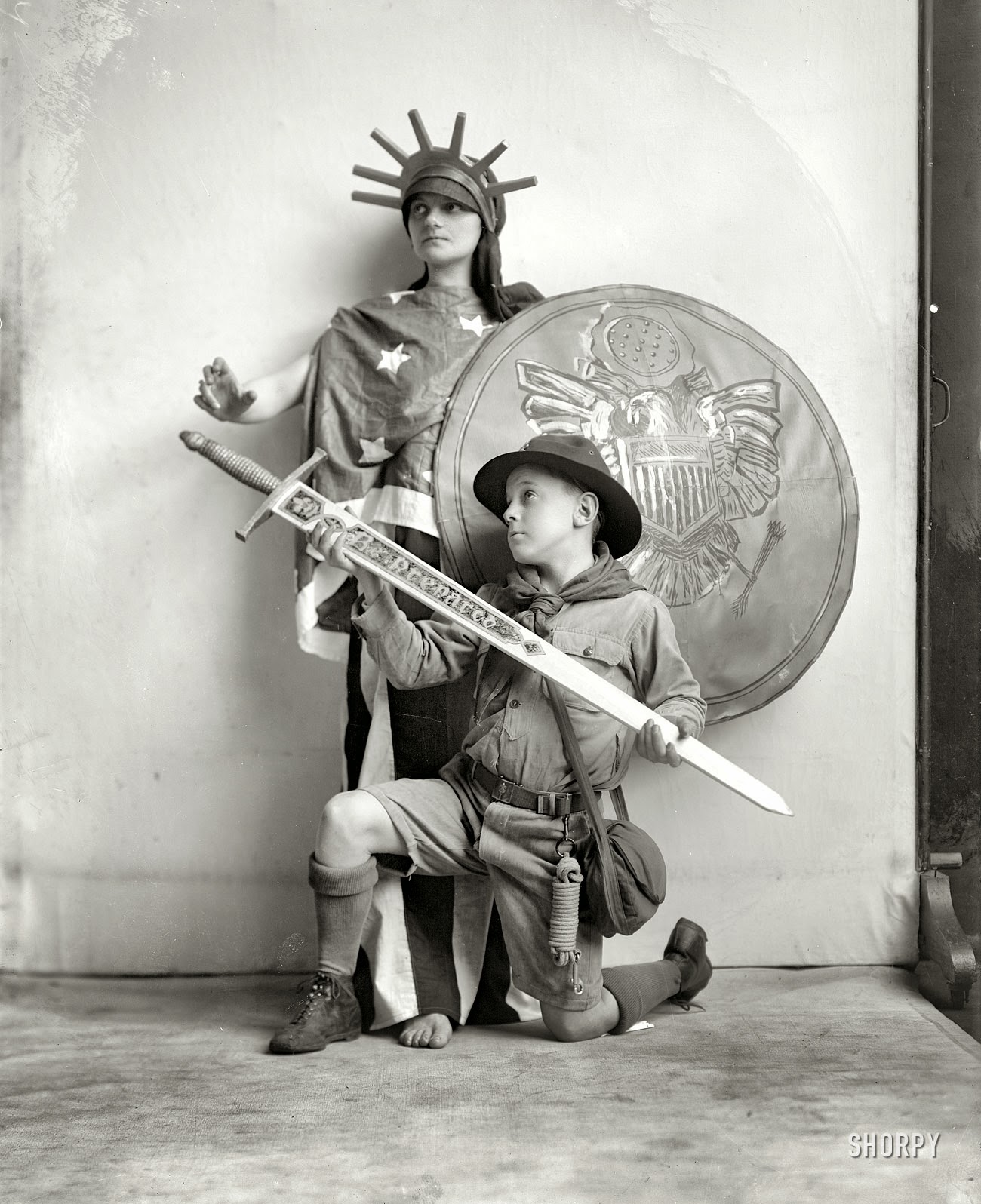 Modeling Joseph Leyendecker’s poster for the Third Liberty Bond Act "Weapons for Liberty". Bonds for this act were issued on April 5th 1918. They amounted to $3 billion ﻿at 4.5 percent interest. 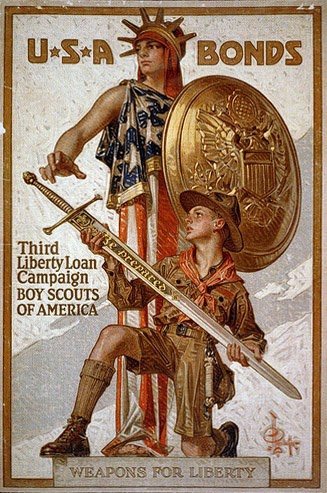 9 million posters of different styles were issued for this campaign. The campaign relied on celebrities as well as the Boy Scouts of America and Girl Scouts of America. Scouts used the slogan "Every Scout to Save a Soldier".
Posted by Unknown at 7:25 PM No comments: 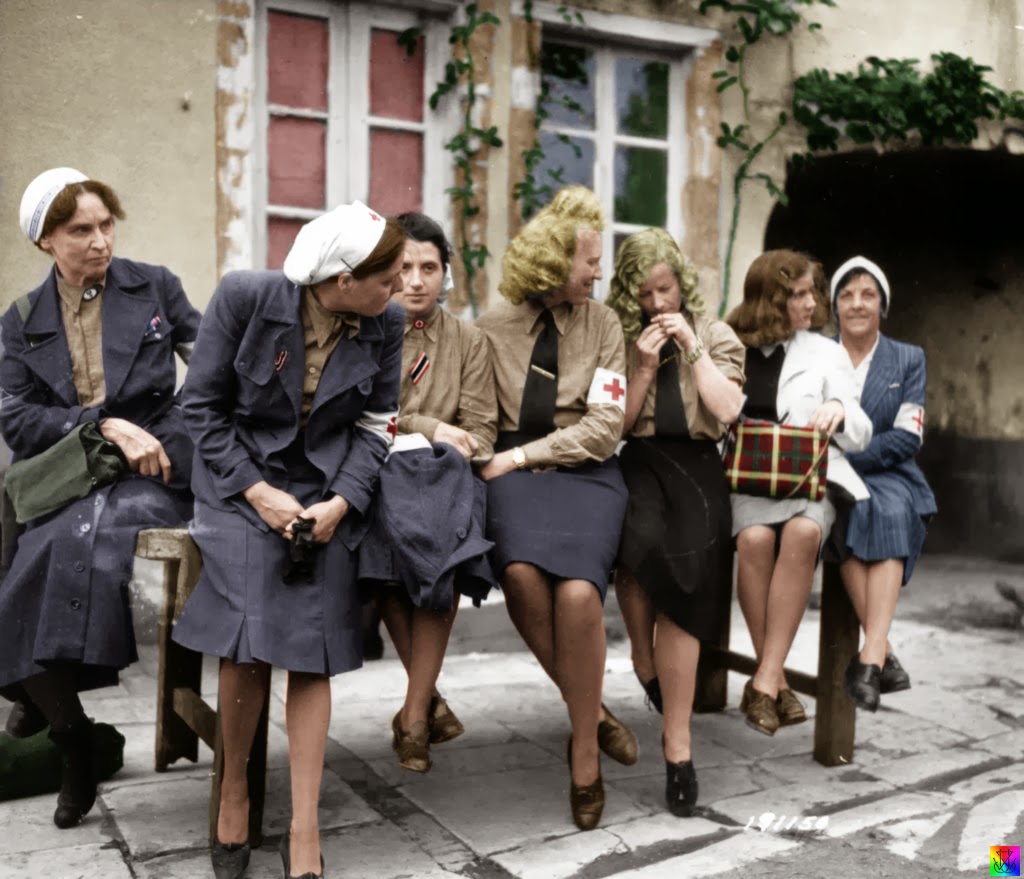 German nurses at Balleroy, Calvados, France, awaiting their return to the German lines due to their roles as non-combatants.
The journey of these German women, members of the Deutsches Rotes Kreuz and Kriegsmarine Auxiliaries, is quite amazing. These women, along with some others, totaling sixteen in number, were captured on or about 30 June 1944, when Cherbourg fell. They had been working there in an underground hospital in Octeville. On the 2nd of July nine of them arrived at the 45th Evacuation Hospital near Le Cambe. During their stay at the hospital they were toured around the facilities and were able to speak with wounded German soldiers. It was hoped that upon their return to the German lines they would remember the treatment being given to the Germans and treat the wounded Allies in the same fashion.﻿
The women waited while a cease-fire was arranged, so that they could be sent to the lines. The women were transported to Balleroy in WC-54 ambulances and had to wait a couple hours while the final arrangements for the cease-fire were worked out. The short cease-fire was agreed upon over the radio by a few men, Captain Fred Ghercke, CAC, CO Prisoner of War Interrogation Team #24; Captain Quentin Roosevelt, G-2, First Infantry Division; and Major F. Heeren, CO Panzeraufklärungsabteiling, 2. Panzer Division. At around 1800 hours the women were taken through the lines at Caumont-l’Eventé. The exchange was reported in the British Edition of “Yank” dated July 30, 1944.
There were actually two exchanges, one on the 2nd and one on the 9th of July. The above pictured women were part of the exchange on the 9th of July. 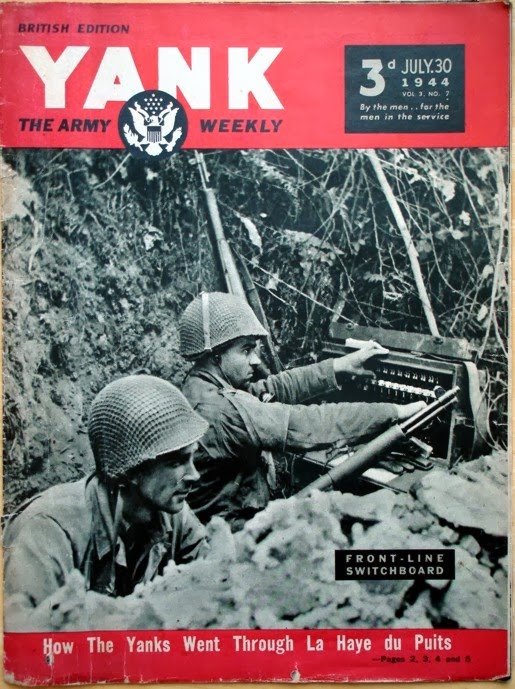 Issue of Yank that reported the story. 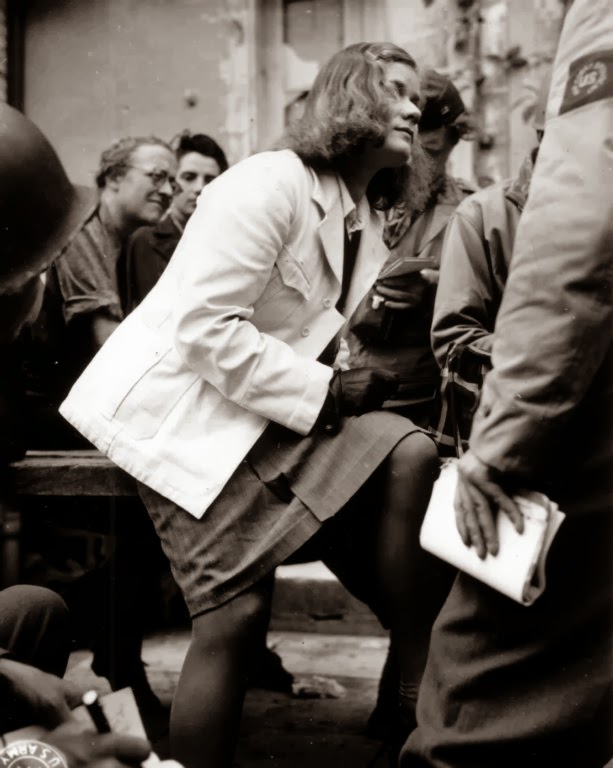 This woman has been identified as Herta Wist. She was working with the Wehrmacht Truppenbetreuung (German equivalent of USO). She was the wife of Korvettenkapitän (Ing.) Karl Wist, Kommandeur of 22. Marinekraftfahrabteilung, also surrendered at Cherbourg. 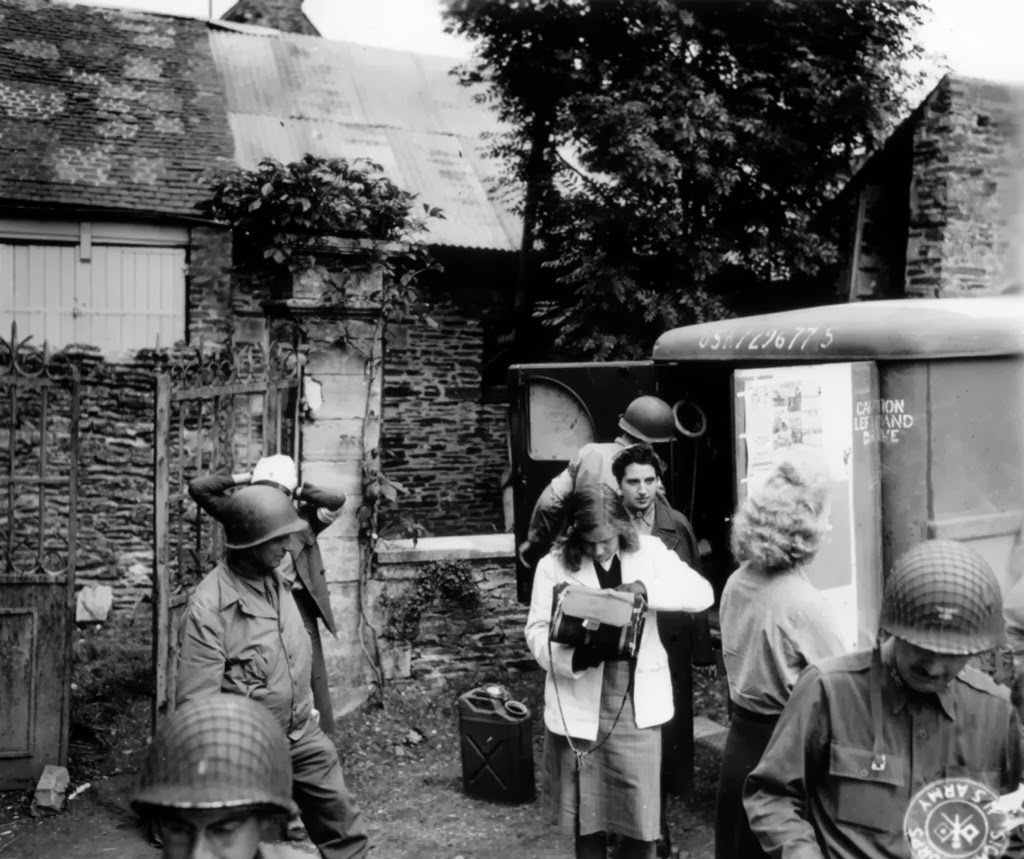 The captured women arrive at Balleroy. They are seen here unloading from one of the WC-54 ambulances that transported them. Here we can again see Herta Wist. 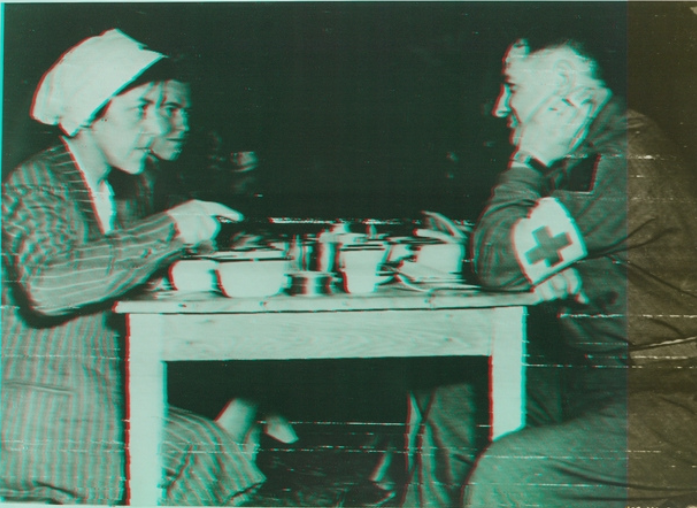 Bert Denley sits on his 1924 Norton 18 at Brooklands motor circuit. I believe this photo was taken someplace near the Home Banking. This is not taken during the International Isle of Man TT (tourist trophy) Race as it is usually captioned. 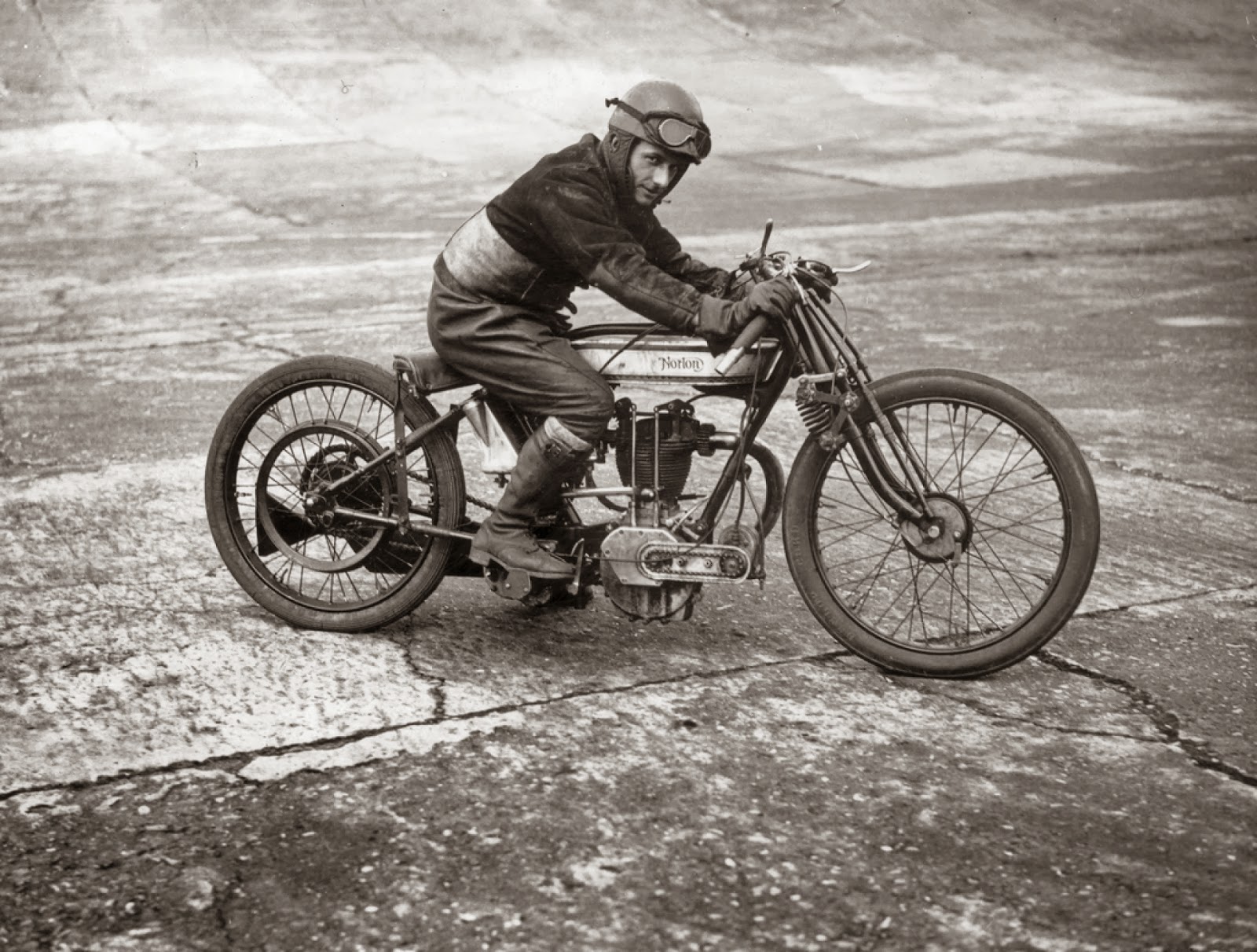 Original photo
Brooklands motor circuit, Surrey, England was opened in 1907. It was the first purpose-built motorsports facility in the world. I operated as a raceway from 1907 to 1914 then 1920 to 1939, it was closed during World War I. The track was built from of uncoated concrete, asphalt was to expensive and laying tarmacadam on banking was too complex. This construction method caused the track to become bumpy and uneven over time, probably making for some exciting racing. 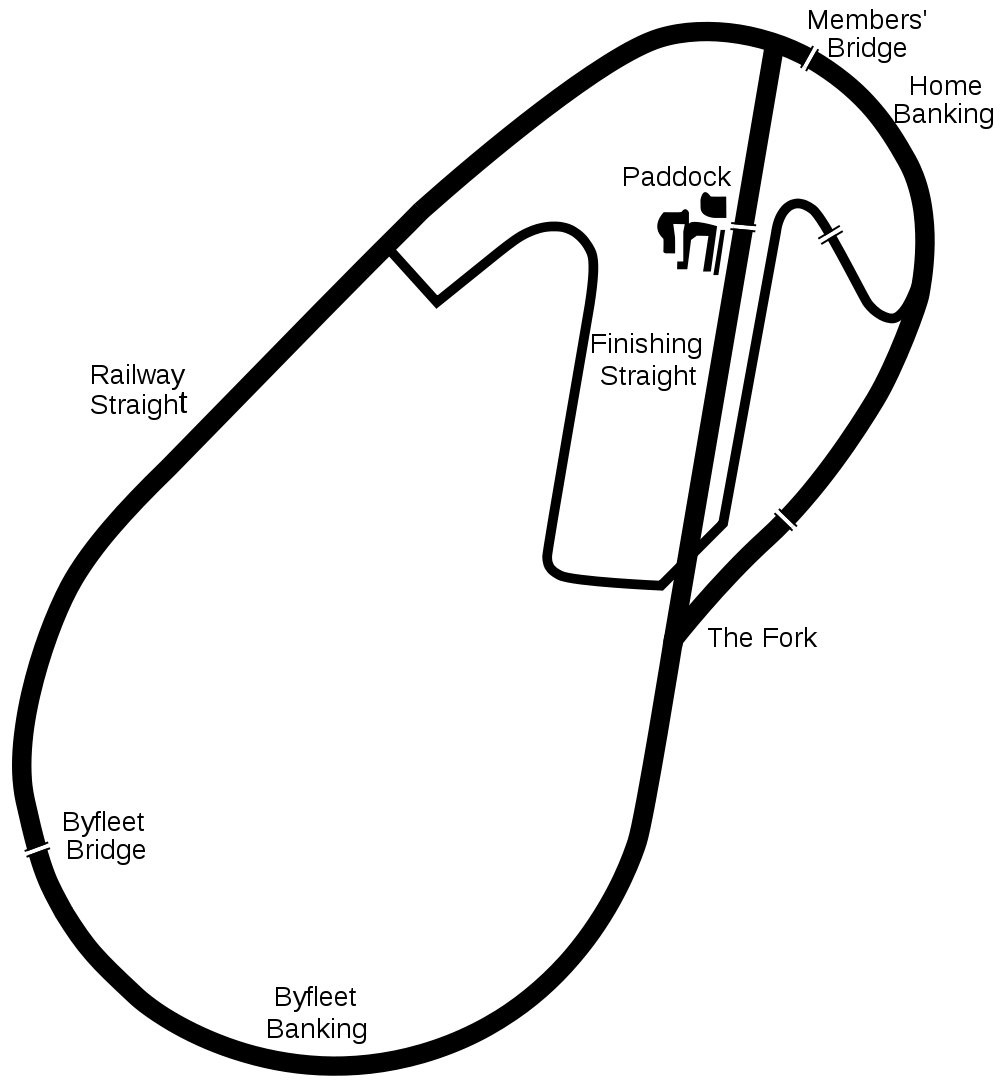 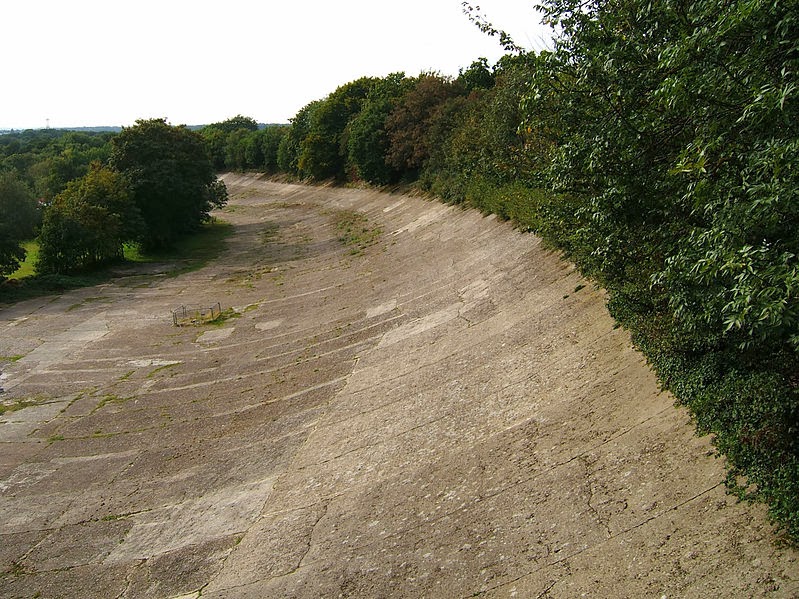 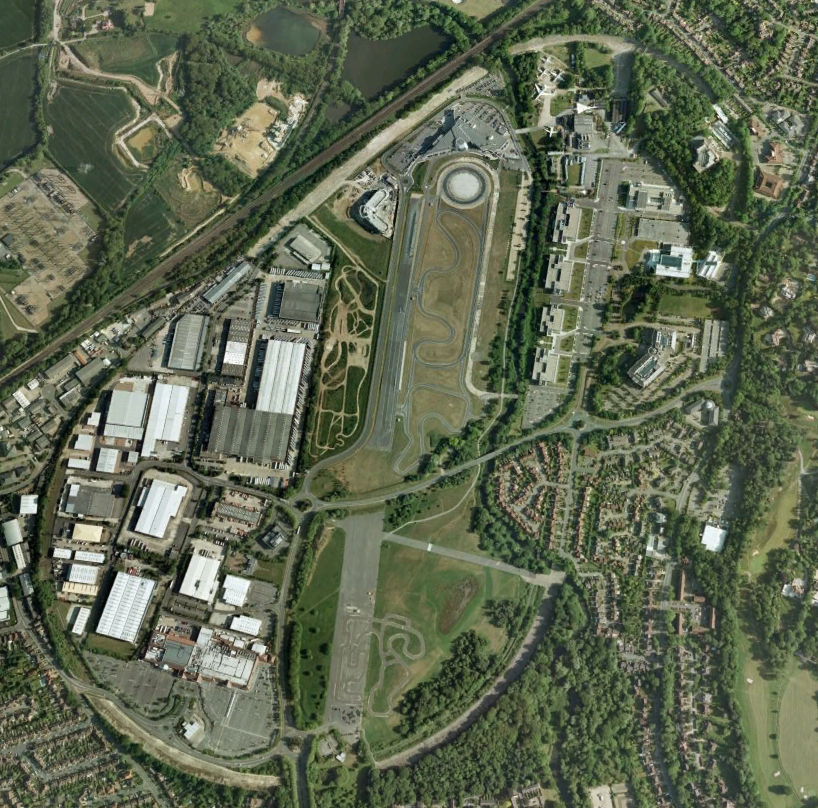 Aerial view of Brooklands today. It is primarily a manufacturing center. You can clearly see the remains of the original track. 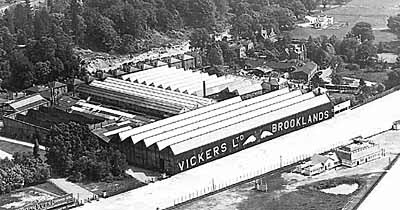 The first manufacturer to locate here was Vickers Aviation Ltd. in 1915.


Today remaining parts of the original track and some buildings are protected and under conservation.

If you are ever in that part of England I suggest a visit to the Brooklands Museum.
Posted by Unknown at 6:34 PM No comments: